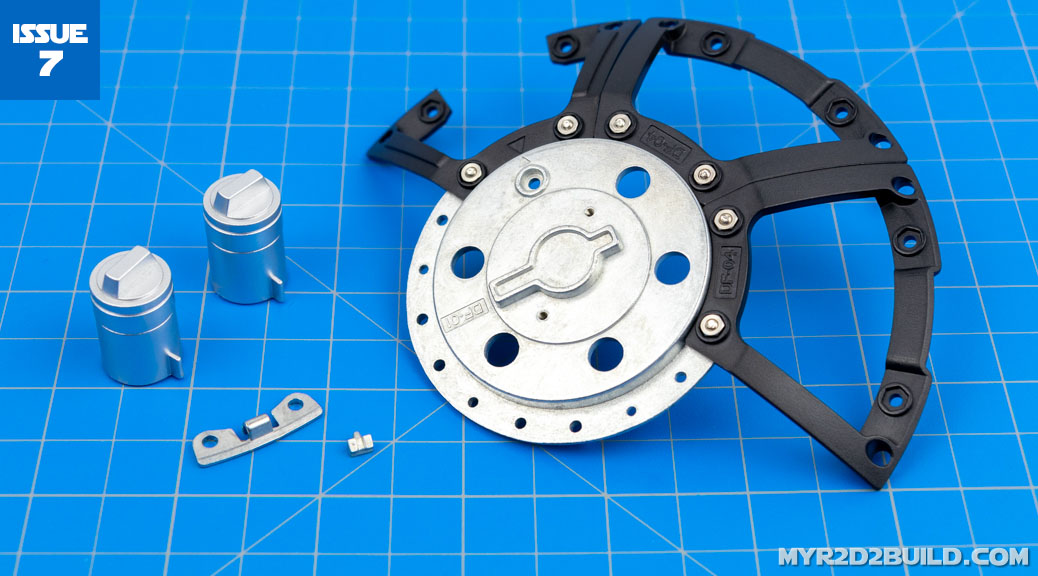 “This [issue’s] parts are used to extend the framework around the top of R2-D2’s dome and add details to his right ankle joint. You have also received the hinge for the top flap that conceals the lightsaber compartment, plus extra fixing screws and nuts to join the parts you are putting together throughout the next few [issues]. Keep these until they are needed.”

I think we are starting to build quite the stockpile of screws as there are 10 more in this issue. We will use left over screws from previous issues here, so no need to open the screws in this issue yet.

NOTE: The two Hinge parts supplied in this issue are never used. A replacement Hinge is supplied and installed with Issue 64. 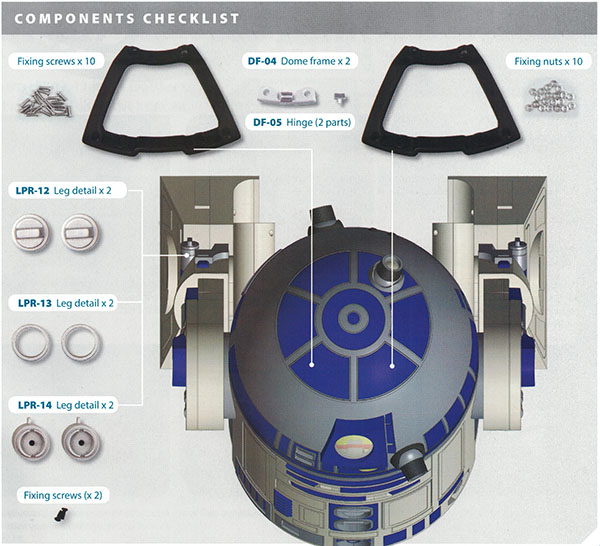 Materials: Everything is metal here, except for the plastic Dome Frames. 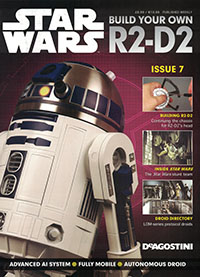 We need the dome assembly from the last issue, the two new Dome Frames, and four (4) 2×6 mm silver screws and nuts.

These are the positions where we will be adding the new Dome Frame parts: 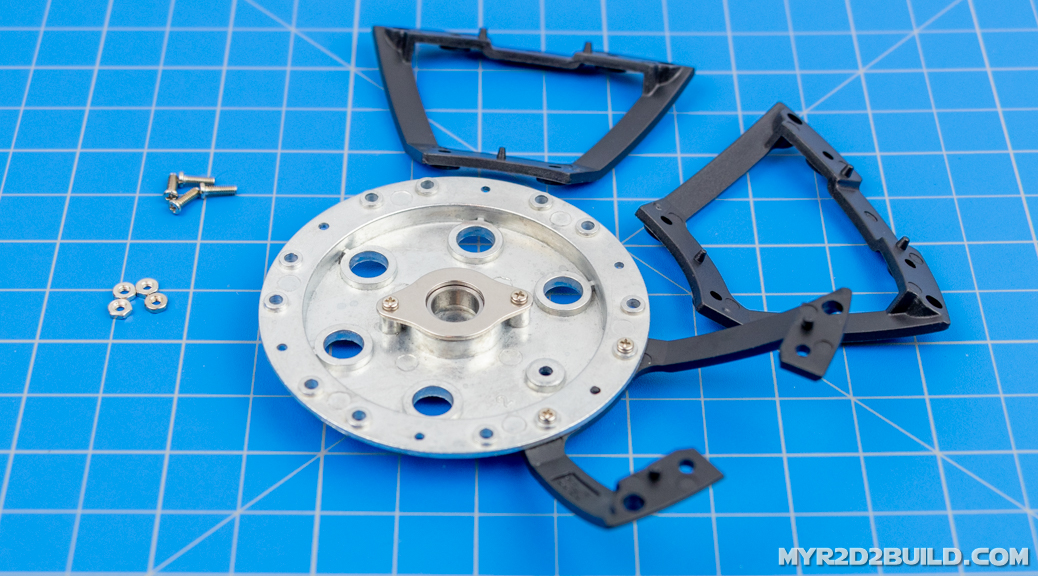 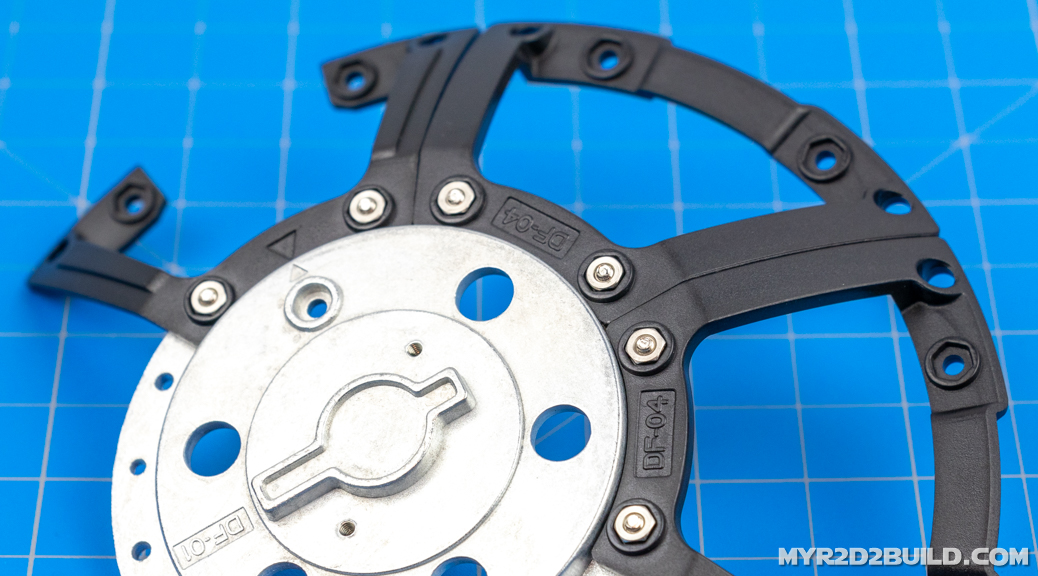 For clarity, this is just one of the two sets of parts. The instructions refer to all of these parts as just ‘Leg Details’ so I will use the part numbers: 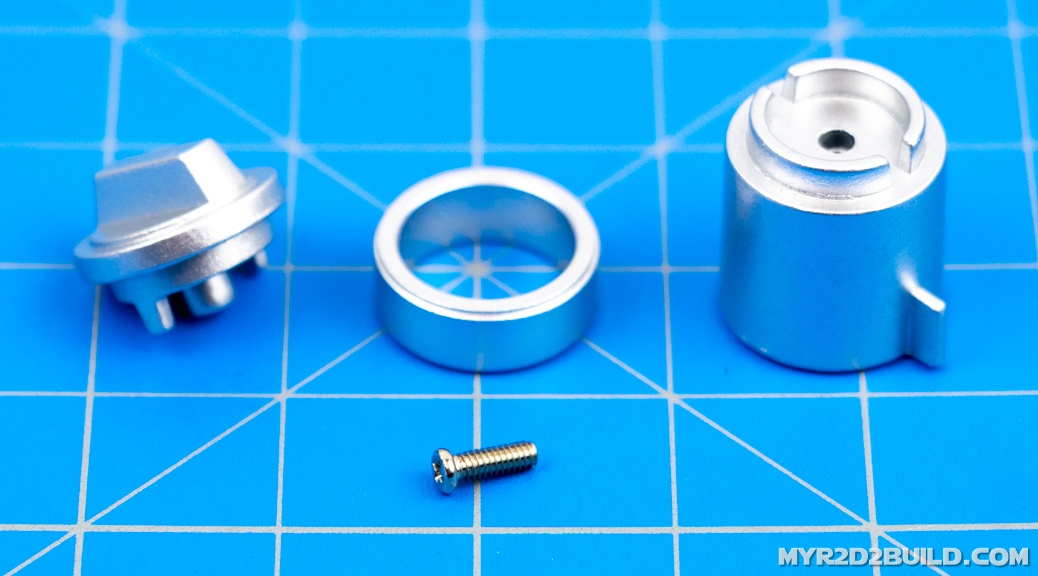 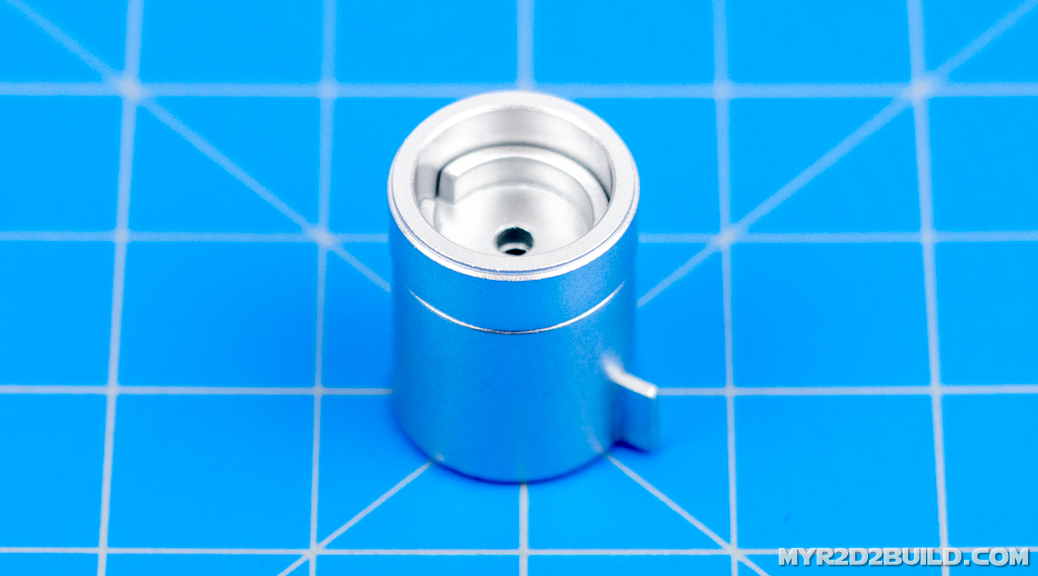 Press one of the LPR-12 parts into the end of the assembly, making sure the lugs (circled in red) fit into the notches (circled in blue): 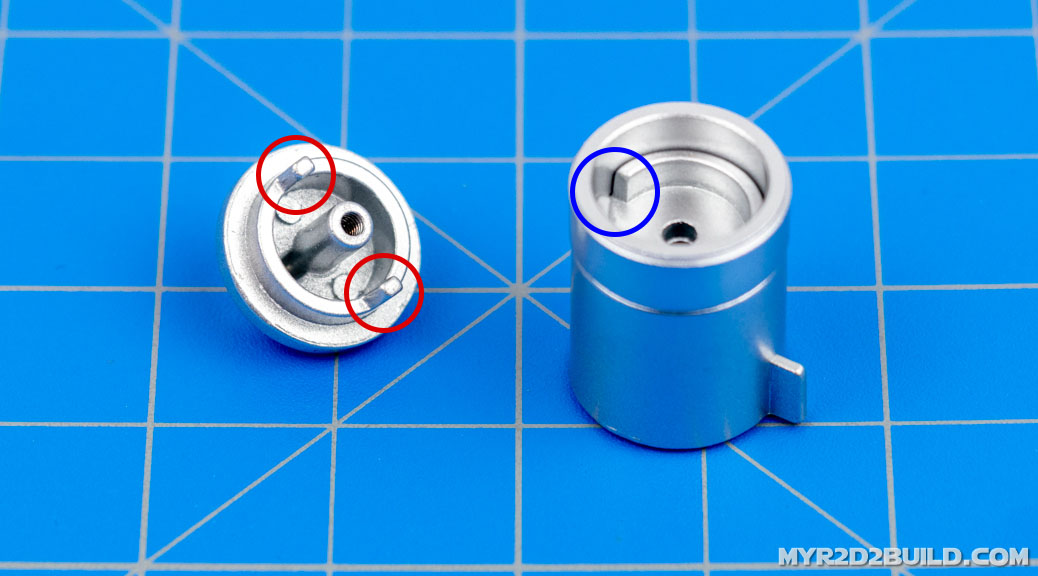 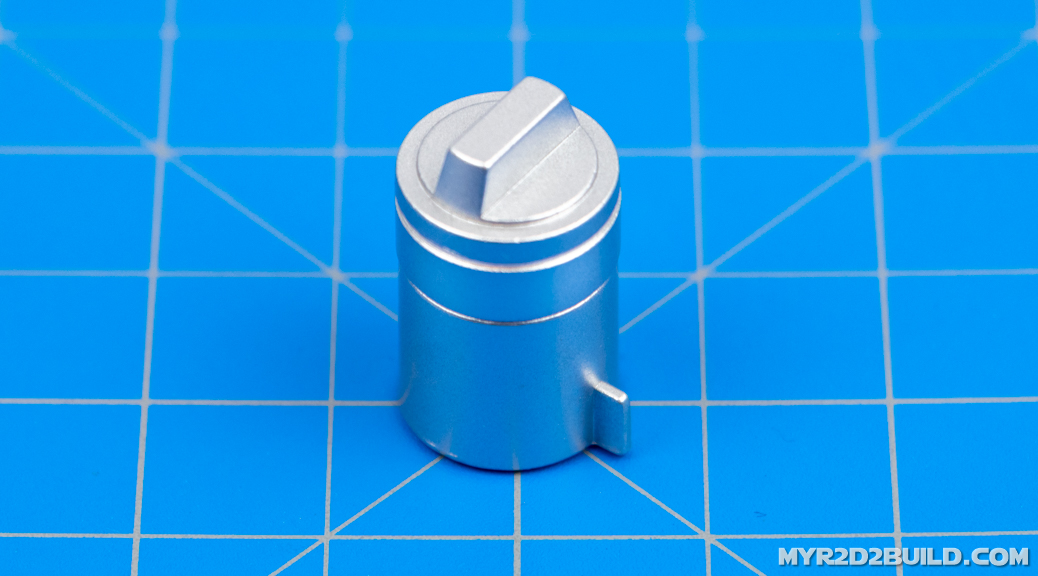 While holding the parts together, drive one (1) 2×6 mm silver screw into the hole in the base of LPR-14 to connect the parts: 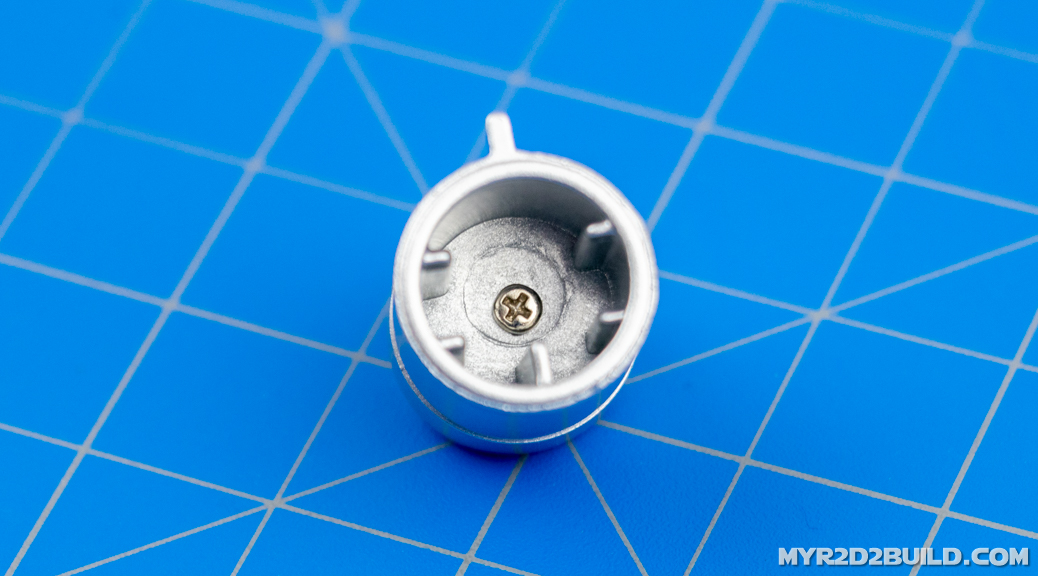 Repeat all of these steps to build the other Leg Detail assembly: 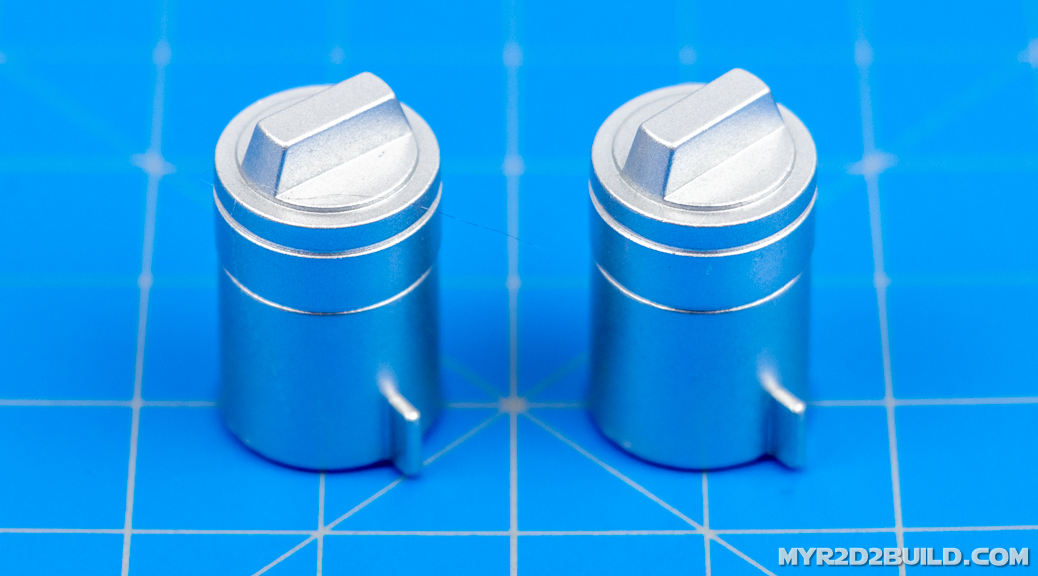 I am pretty happy that there is a good amount of metal in the build so far. While metal adds weight for a moving robot, it is also a lot stronger, durable, and looks better. We will be attaching most of these parts in the next issue.